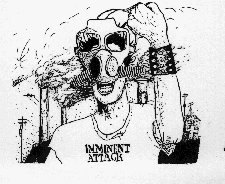 Imminent Attack was formed in September 1981 with members from Mt. Horeb, and Madison, WI. The band first consisted of Kevin Gayton(vocals), David Gayton(guitar), B-rad Skaife(drums), and Mike Hunsberger(on bass), but a few changes were made to the line-up over the years. The first change came when Mike realized not only he sucked at bass (he just got his first bass, a JetGlo Rickenbacker 4001!!! a few months earlier) but couldn't play in front of more than 3 people. This is when Jim Kading started playing bass in the band. Mike later played "second" guitar in the band.(don't call it rhythm guitar please!!) Late in the 80's Brad quit and Frank Attaway sat behind the drum kit. IA was mostly a metal band by this time. IA turned out to be a pretty important local mid-west punk/metal band for most of the 80's. The band started out playing originals as well as classic covers from Eddie Cochran, Black Sabbath, Chuck Berry, and the Ramones to name a few. IA had quite a following in the mid-west and played with many bands including: The Dead Kennedy's, Black Flag, Motorhead, Husker Du, The Circle Jerks, Die Kreuzen, Tar Babies, DRI, Batallion of Saints, Crucifucks, Exciter, The Exploited, 7 Seconds, The Descendents, M.D.C. and many more... In that time a few tapes and an album were released. Most of the recordings were done by the guy's over at Smart Studios.(There is currently a Smart Studio Documentary where IA may be mentioned but it's doubtful much will be said. ) Butch Vig and Steve Marker of Garbage if you didn't know. (boy, have they come a long way) Due to lack of marketing, location and generally having no money or a record label, the band never really reached the potential they should have. Well too bad... that's punk rock.